Preparing for
the Future
Cornell Course

Preparing for the Future ()
Tell me more!
Online

In our VUCA world, it is easy to feel weighed down by daily issues. You can become so consumed by the difficulties of the present moment that you neglect to look ahead and analyze your larger mission. Yet as a leader, you have to be able to step back from the challenges that each day brings and assess the big picture. You have to help your people envision what the future looks like. Even the most skilled leaders agree that this is not easy. However, there are concrete measures you can take to prepare for future success.

In this course, you will learn how to develop a plan to evaluate your organization's ability to accomplish its vision and strategy. You will apply Lewin's three-stage model of change to enable your organization's continuous adaptation and devise a plan that demonstrates how you will sustain progress. Finally, you will apply the read, exercise, sleep, and think (REST) model to take care of yourself and remain effective as a leader. 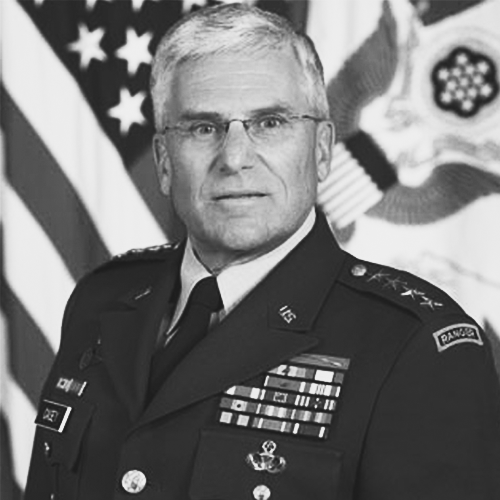 General George W. Casey, Jr. enjoyed a 41-year career in the U.S. Army following his graduation from Georgetown University’s School of Foreign Service in 1970. He is an accomplished soldier and an authority on strategic leadership. As the Army Chief of Staff, he led one of our largest and most complex organizations during one of the most extraordinary periods in our history. He is widely credited with restoring balance to a war-weary Army and leading the transformation to keep it relevant in the 21st Century. Prior to this, from July 2004 to February 2007, he commanded the Multi-National Force – Iraq, a coalition of more than 30 countries. He guided the Iraq mission through its toughest days and set the conditions for our long-term success.

Currently, he lectures internationally on leadership to the leaders of national and multinational corporations and at other business schools. He serves on several corporate boards and numerous boards of organizations that support our servicemen and women, our veterans, and their families. He also teaches international relations at the Korbel School in Denver.

He holds a Masters Degree in International Relations from Denver University, and served as a Senior Fellow at the Atlantic Council of the United States, a foreign policy think-tank. He has broad international experience. Born in Japan, he served in operational assignments in Europe, the Balkans and the Middle East.